To those of you who missed the KAC  District 5 meeting Saturday, July 9, we had a great time with Esther Luttrell who spoke on “Being a Writer”.  Esther is a great   motivator. She cautioned us NOT to seek an agent, NOT to seek a publisher, NEVER to pay a publisher to publish a book because they do NO marketing for you at all.

Instead, she urged us to do as much as possible to edit carefully, and recommended Create Space as a well-formed site to help us self-publish. There was some further discussion after the meeting, and hopefully we can have Esther back for a 3-hour workshop on these issues in the near future. She has a great deal that she can teach us about self-publishing and its many aspects.

Esther also provided notes (below) on how to format a book in the most professional way.  We did a writing exercise with a read around and it was a most profitable
meeting.

Ideas for future meetings and discussion: District 5 to develop a list of “alpha”, and “beta” readers: folks who are willing and able to read and at least make editorial suggestions for new works being prepared for self-publishing.
​
Connie White, Secretary 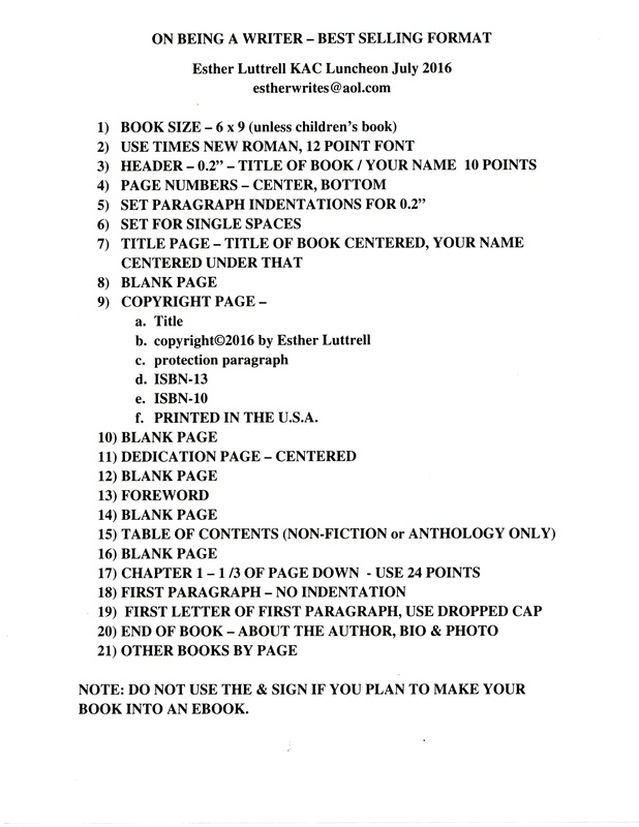